What is the Difference between a BR30 and BR40 Bulb?

If you have recessed cans for lighting in your home or office and need to replace the bulbs, you may discover that there are several options to choose from. If you want to light a more specific area, for instance, you might choose a PAR shaped bulb, which more sharply focuses its light.

But for the sake of this article, we’ll discuss the two bulbs most commonly used in recessed cans for general lighting: BR30 and BR40. We’ll also talk briefly about the pros and cons of choosing LED bulbs, as well as an LED alternative you can consider. 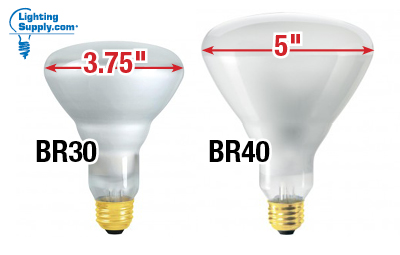 Let’s start by understanding the terminology. In the names of these bulbs, BR refers to a bulged reflector; this shape is used to evenly spread light, which is why these are used for general lighting.

So when you’re choosing a bulb for recessed cans, the first thing to know is the size of the cans. For general lighting, most cans are 4″ or 5″ or 6″. For 4″ cans, you cannot choose BR40 bulbs — they’re too big. For 5″ cans, a BR30 will fit with a little space to all sides while a BR40 will fit with little to no space on the sides. For 6″ cans, a BR30 may leave so much space between the bulb and trim that you don’t care for the look, though this is a personal choice. 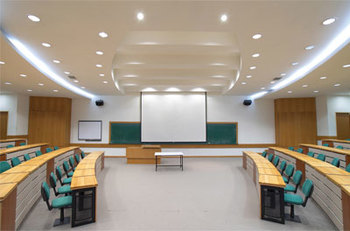 Ceiling height is another traditional consideration when choosing your bulb; BR30s are often used on lower ceilings with BR40s on higher ceilings. If the bulbs are equal in wattage, this may not make much of a practical difference; but BR40s commonly come in higher wattage options, helping them spread light across a room from that greater height.

Arguably, with the same beam angle but a wider lens, BR40s spread light a little more widely than BR30s. This could affect your bulb selection based on purpose of the lighting and distance between the cans. But practically, this is likely to be a subtle difference, and we recommend choosing primarily for wattage (or lumen output) and the size of the cans.

​Now that we understand the uses of BR30 vs BR40 bulbs, let’s talk about the pros and cons of choosing LEDs for your light bulbs. The big claim to fame for LED lighting is that it operates on far less energy to produce lighting equal to an incandescent or halogen bulb. This means it costs a lot less to run and, at today’s LED prices, an LED replacing a frequently used incandescent bulb will often pay for itself in 1-2 years and then start putting money in your pocket for years to come.

But the last push for energy efficient lighting with CFLs left a bad taste in many people’s mouths — yes, those bulbs saved money on electricity, but they had some drawbacks too. So we’ve spent a lot of time teaching about LEDs in detail, for instance in our Ultimate Guide to LEDs. But let’s take a quick look here at how LEDs and incandescent bulbs compare:

Similarities: Like incandescent bulbs, LEDs reach full brightness immediately. Both work well in a wide range of temperatures, and both are free of mercury.

Lifespan: Some LEDs are only rated to last 5000 to 10,000 hours; many are rated to last 25,000 hours and more. Compare that to an incandescent rating of 1000 hours. Those who remember that CFLs didn’t live up to their 10,000 hour claims, LEDs aren’t affected by the same things like frequent on-off cycling or cold temperatures. So if LEDs are made of quality components, they should often last this long.

Dimming: Incandescent bulbs are masters of dimming. Most LEDs also dim (check the packaging), but they need compatible dimmers. Otherwise you may run into flickering and buzzing. Some LEDs (like this BR30) get a warmer look when you dim them to mimic incandescent bulbs; again, look for this feature on packaging.

Durability: As you know, incandescent bulbs are pretty delicate thanks to the glass bulb and the thin filament. Some cost more and come with a better supported filament and shatter resistant bulb. But LEDs — which have plastic bulbs and no filament — are durable from the start.

Heat: As you also know, never unscrew an incandescent bulb that was recently turned on or you can burn your hand. LEDs stay cool the touch on the bulb portion, though their heat sinks toward the back get hot. Due to their need to dissipate heat, LEDs also need some air flow, so check the packaging for compatibility if you plan to use an LED in an enclosed fixture.

Color Rendering: We perceive the colors of things differently depending on how the object is lit. This is because of the wavelengths present in the light. Incandescent bulbs are typically considered the best light bulbs for providing us with accurate colors, but LEDs do an excellent job as well, and as we’ve shown elsewhere, arguably render colors better. This is a matter of personal preference.

Color Temperatures: This term refers to how warm or cool the bulb appears to the eye, and we measure this in Kelvins. 2700K to 3000K are considered warm colors, and look more yellow; 3500K to 4100K are neutral, fairly white in appearance; 5000K and above are considered cool, and look more blue.

Incandescent bulbs are usually around 2700K, and even warmer when you dim them. Many LEDs can appear 2700K as well, and as we’ve mentioned, some warm as they dim as well. But LEDs also offer a range of cooler color temperatures, giving you more flexibility in different settings. Some people, for instance, prefer neutral or cool color temperatures in kitchens and utility settings like laundry rooms.

Why you need to switch to LED from the conventional lighting? Increasing the energy efficiency in your home doesn’t mean... read more

How to Light Your Warehouse Effectively ​Lighting a warehouse can become very daunting to building owners. It is a financial... read more

Your Guide to Finding the Right Bulb, How to choose the right one? Trying to determine which light bulb you... read more

When seconds count, exit and emergency lighting must be bright, sturdy, and reliable then we can say amazing things.... read more